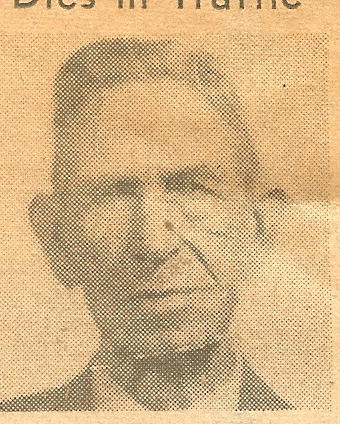 We always knew that my 2nd great-grandfather Michael Daniel Cain was born in Ireland and came to the US as a toddler in the mid-1860’s, but that’s about all that anyone in our family knew.  Here is the newspaper article from the February 13, 1946 Indianapolis Star:

Please note that the article mentions his nieces Viola and Aleda Cain, but they were actually his granddaughters.

A few years ago, I found his naturalization document online.  He wrote in his request for citizenship that he had been born in “Glan, Ireland” and was three years old when he came to America.  Apparently, he first voted in 1884 for Garland, when some politician told him that since he’d been in the US since he was 3, he was eligible to vote.  But in 1939, he applied for Social Security and discovered he actually was not a citizen.  In his Social Security application, he listed his parents as Daniel Cain and Margaret Donlon.  At age 79, in 1941, he applied for and was granted citizenship.  Here is his naturalization document:   Cain Michael naturalization

Beyond these few tantalizing details, I knew nothing of his early life until last week.  I was just killing time one evening, putting searches of family names into the NewspaperArchive website.  I typed in Margaret Donlon Cain in Madison, Indiana.  Now, I had searched for her many times before over the last several  years.  I have been to Madison, Indiana, and searched at the historical society there and at the library and at the cemetery.  I have never succeeded in finding out anything at all about her.  I do not know whether I changed the search in some new way, or whether the newspapers are newly on that site, but last week, up popped an obituary for her on February 9, 1916.  It was actually a copy of an article that was originally printed in the Mead, Kansas, newspaper.

So, for the first time, I knew that Michael Daniel Cain had a sister and brother.  I also now know that Margaret Donlan was born in “Clooncatt” in county Galway on Christmas Day, 1832 and that her husband, Daniel Cain, died a few years before she brought the three children to Madison, Indiana.

From here, I went to the County Galway Genealogy group on Facebook to ask if anyone knew where “Clooncatt” was, because I couldn’t find it on Google Maps.  It took no more than a few minutes for answers to come pouring in.  The place is actually called Cloonacat, Raheen parish, near Glenamaddy, county Galway, Ireland.  And I also learned from current residents of the area that the locals shorten Glenamaddy to Glan when they speak of it.  This explains Michael Daniel’s use of “Glan, Ireland” on his naturalization application.

Next steps for me are to learn more about Michael Daniel Cain’s brother and sister.  Do we have Cain or Wehrle cousins?  And I need to see if I can find information about Margaret Donlan’s parents and family back in Ireland.  According to her obituary, she still had a brother “P. Donlan” living in Cloonacat in 1916.  And, of course, I still know nothing about Daniel Cain other than that he died in about 1862, perhaps before Michael Daniel Cain was born.  Perhaps descendants of Anna Cain Wehrle even have pictures or more information about the family.

One thought on “Where was Michael Daniel Cain born?”